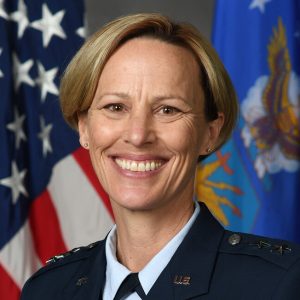 Maj. Gen. Pringle received her commission from the U.S. Air Force Academy in 1991. She is experienced in science and technology development, acquisition program management, program and budget analysis, and installation support.

In addition, the general promoted international relationships, interoperable capabilities and sustained engagement with partners in the Middle East and Asia during her tenure as commander of the 555th International Materiel Squadron and while serving in Afghanistan as the Political Advisor’s Staff Director for the International Security Assistance Forces. She also provided direct support to the Air Force Chief of Staff as Executive Officer, assisting him in all official duties and engagements with Congress, allies, the Joint Staff, combatant commands, and other government agencies. Prior to her current assignment, Maj. Gen. Pringle served as the Director of Strategic Plans, Deputy Chief of Staff for Plans and Programs, Headquarters U.S. Air Force, Arlington, Virgina.