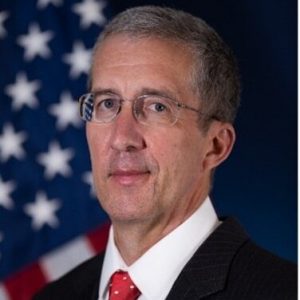 Dr. Michael Leahy joined DARPA as director of the agency’s Tactical Technology Office in May 2019, marking his return to the agency, where he previously led the DARPA/U.S. Air Force Unmanned Combat Air Vehicle Program (X-45A) from conception through first flight.

Most recently, he was the chief product officer for Dreamhammer Corporation, a startup technology company focused on monetizing their DoD heritage technologies and expertise for commercial markets. Before that, Leahy held a series of senior director leadership positions within Northrop Grumman Aerospace Systems from technology maturation in support of major program captures to design, development and support of ground control stations for all their UAVs.

Prior to joining Northrop Grumman in 2007, Leahy had a distinguished 27-year U.S. Air Force career retiring as a colonel. Over that span, Leahy made significant contributions to the advancement of aerospace technology and advanced systems. In addition to leading the X-45A effort with DARPA, he was a professor at the Air Force Institute of Technology; served as director of the Air Vehicles Directorate at the Air Force Research Laboratory; and served as vice director of the 448th Combat Sustainment Wing.

Leahy earned a bachelor’s degree in electrical engineering from the Stevens Institute of Technology, a master’s degree in electrical engineering from the University of New Mexico, a master’s degree in national resource strategy from the Industrial College of the Armed Forces, and a doctorate in electrical engineering from the Rensselaer Polytechnic Institute. Leahy received the AIAA 2010 Hap Arnold Award for sustained excellence in aeronautical program management and the Association for Unmanned Systems International Pioneer Award. He was the National Society of Professional Engineers, USAF Engineer of the Year, Air Force Institute of Technology Outstanding Professor of the Year; has authored 48 refereed, international, journal, and conference publications; and was the founding editor of the IEEE Robotics and Automation Magazine.