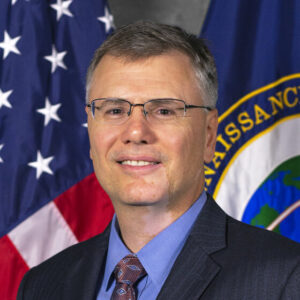 (U) Dr. Troy E. Meink was appointed Principal Deputy Director, National Reconnaissance Office (PDDNRO) on 5 October, 2020. As the PDDNRO he provides overall day-to-day management of the NRO, with decision responsibility as delegated by the Director, NRO (DNRO). In the absence of the DNRO, he acts on the Director’s behalf on all matters.

(U) Dr. Meink is from Lemmon, South Dakota and entered the Air Force in 1988 through the ROTC program at South Dakota State University. His assignments have included operations and training, systems engineering, research and development, and program management of major defense acquisition programs. Dr. Meink began his career as a KC- 135 Tanker Navigator and Instructor and then a lead test engineer for the design and evaluation of ballistic missile test vehicles for the Missile Defense Agency. As an Air Force Civilian, he managed multiple next generation joint research and development programs transitioning global space capabilities, optical sensors, and advanced structures. He subsequently led development for the Military Satellite Communications Joint Program Office and served as program director for the Transformational Satellite Communications System. He was Director, Communications Directorate, Office of the Assistant Secretary of Defense/Networks and Information Integration, and the Director, Signal Intelligence Systems Acquisition, National Reconnaissance Office (NRO). Dr. Meink left the NRO for a time when he was assigned to the Department of the Air Force as the Undersecretary of the Air Force for Space and the Director, Executive Agent for Space Staff in Washington, D. C. Dr. Meink then served as the Assistant Director of National Intelligence for Systems and Resource Analyses. His previous assignment was as Director, Geospatial Intelligence Systems Acquisition (GEOINT) at the NRO, starting in April 2017. In that capacity, Dr. Meink was responsible for the successful execution of all national geospatial intelligence satellite systems acquisitions within the NRO with a budget of more than $15 billion.