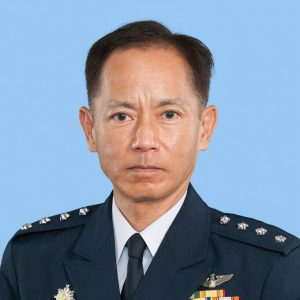 General IZUTSU Shunji assumes duties as the Chief of Staff, Koku-Jieitai (Japan Air Self-Defense Force) on August 25, 2020. As the highest ranking officer in the Koku-Jieitai, he leads a force of some 50,000 service members and civilians.

He is a native of Chiba Prefecture, east of Tokyo, and a graduate of National Defense Academy, where he was enrolled in the Department of Mechanical Engineering. He studied at the US Air Force’s Air Command and Staff College and Harvard Kennedy School, earning his Master in Public Administration.

His key staff assignments include Chief of Defense Plans and Policy Section at Air Staff Office (ASO), Director of Personnel Division at ASO, Deputy Inspector of Inspector General’s Office of Legal Compliance and Director General of Personnel and Education Department at ASO.

He also has an overseas assignment for reconstruction and support mission for Iraq.

General Izutsu enjoys running and building plastic models. He is married to Yuko, and they have 2 children.