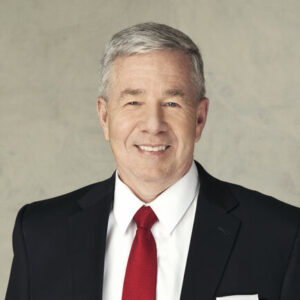 Trey Obering is a Booz Allen Hamilton Executive Vice President based in McLean, Virginia. He works with clients in the Directed Energy area across the DoD and Intelligence communities. An expert in acquisition and program management, he also works with clients in the Air Force Materiel Command, Air Force Space Command, and Missile Defense markets. He leads the Acquisition Program Management and Logistics Functional Community which develops and improves the skills of the hundreds of acquisition and logistics professionals across the firm. Based on his experience, he has led two National Academy of Sciences committees sponsored by the Assistant Secretary of the Air Force (Acquisition) to help the Air Force improve the management of their programs. Prior to joining Booz Allen, he led a comprehensive review of the National Reconnaissance Office for the Director, National Intelligence, which provided a new charter for that organization.

Mr. Obering retired from the US Air Force as a Lieutenant General with more than 35 years of experience in space and defense systems development, integration, and operations. He served as Director of the 8,500-person Missile Defense Agency, Office of the Secretary of Defense.

He was the Department of Defense (DoD) Acquisition Executive for the nation’s $10 billion per year missile defense portfolio. In addition, he served as the program manager for the Ballistic Missile Defense System. Prior to his assignment at MDA, he planned and programmed 68 joint, Air Force and international programs with a $28 billion budget as Mission Area Director for Information Dominance on the Air Staff.

Mr. Obering entered the Air Force in 1973 after completing the University of Notre Dame’s ROTC program as a distinguished graduate. He received his pilot wings in 1975 and flew operational assignments in the F-4E. Later, he was assigned to the Space Shuttle program and participated in 15 space shuttle launches as a NASA orbiter project engineer and was responsible for integrating firing room launch operations. Other assignments include tours with the Air Force Inspector General, the Defense Mapping Agency, and Electronic Systems Center.

Mr. Obering has twice earned the DoD’s highest non-combat award, the Defense Distinguished Service Medal for leadership. In 2008, he received the prestigious University of Notre Dame Rev. William Corby Award recognizing alumni who have led a distinguished military career. He was honored by the National Defense Industrial Association’s Missile Defense Division with the 2011 Kadish Award for Acquisition Excellence.