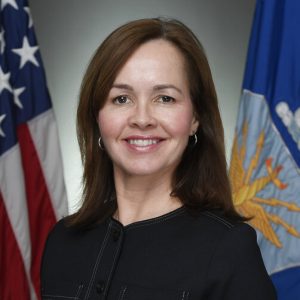 Kelli L. Seybolt, a member of the Senior Executive Service, is the Deputy Under Secretary of the Air Force, International Affairs, providing oversight and guidance for Air Force international policy and programs in support of national security objectives. In this capacity, Ms. Seybolt manages the security cooperation enterprise for the U.S. Air Force, overseeing the planning of activities involving training and education, exercises, equipping, information exchanges, personnel exchanges, agreements, and defense and military contacts.

Ms. Seybolt began her career as a Presidential Management Intern with the U.S. Department of State. Today, she is a 25-year member of the Federal Civil Service, with broad experience in U.S. space policy, security cooperation and international affairs. She began her career with the U.S. Air Force as an External Affairs Specialist working on a multiagency environmental satellite program. She subsequently became the Senior Advisor to the Deputy Assistant Secretary of the Air Force for Space Plans and
Policy with responsibility for the development of international space cooperation strategies, policy on orbital debris, and
oversight of civil and international space cooperation. She first joined SAF/IA as the Chief for International Space Cooperation, where she worked to build a strong portfolio of Air Force partnerships across space mission areas. This work culminated in her leading the negotiations for a $6B collaboration with a major ally, which expanded interoperable communications for both the U.S. and allied warfighter—an effort that has been repeated with numerous partners since.

From 2007-2008, Ms. Seybolt joined the RAND Corporation as an Air Force Fellow, participating in Project Air Force research projects. She was promoted to SES in 2010 as the Director of Strategy, Operations and Resources in SAF/IA, responsible for the development and execution of the Air Force Global Partnership Strategy and the first ever Air Force Security Cooperation Engagement Strategy. In this role, she oversaw the planning, programming, budgeting and execution of the $100 million plus portfolio of Operations and Maintenance, Research, Development, Training and Education, and FMS budgets.

Prior to returning to the Air Force, Ms. Seybolt served as the Director of International Affairs and the Foreign Policy Advisor for the U.S. Coast Guard. In this role, she was the Coast Guard Senior Leadership’s key policy advisor on all agency activities related to international affairs and engagement. She was also responsible for developing, coordinating and implementing agency strategy, policy and programs related to Coast Guard international activities.