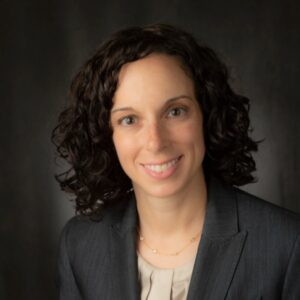 Kristin Houston is the President of the Electro Optical sector for L3Harris Technologies. In this role, Kristin oversees P&L responsibility of approximately $1.2B of revenue across multiple divisions and sites, including WESCAM, WESCAM USA, Space & Sensors and MAS.

Kristin assumed the role of President in 2021 and reports directly to the President of the Integrated Mission Systems Segment.

Prior to joining L3Harris, Kristin served in various executive roles with the Boeing Company. Most recently, she served as the Vice President of Engineering and Chief Engineer for the Vertical Lift division of Boeing Defense, Space & Security.

As part of her role, Kristin oversaw a team of over 2,000 engineers and a portfolio, which included the AH-6 Little Bird, AH-64 Apache, H-47 Chinook, MH-139 Grey Wolf, V-22 Osprey and DEFIANT X. She also implemented hiring practices that improved diversity of management hires by 50 percent in one year.

Kristin has held several other programmatic and technical leadership roles at Boeing, including service as Vice President of Tiltrotor Programs and Director of the Bell Boeing V-22 program.

She also served as Director of International Apache Programs, managing development and production of 15 AH-64E Apache attack helicopter programs for customers in Asia, Europe and the Middle East.

Kristin holds a Bachelor of Science degree in Chemical Engineering from the University of Pennsylvania and an Executive MBA from Villanova University with Beta Gamma Sigma honors.

Kristin serves as a board member for the Marine Corps Heritage Foundation and is an advisory board member for Liberty USO. She has been an executive sponsor for numerous Employee Resource Groups and the Society of Women Engineers. She is passionate about supporting initiatives that promote workplace diversity and inclusion.

The Philadelphia Business Journal named Kristin to its 40 Under 40 Class of 2018. She is also an avid runner, cyclist and triathlete.