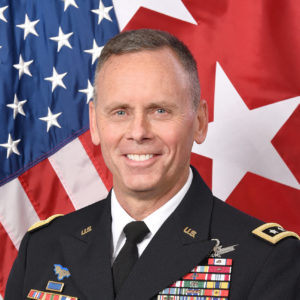 LTG Karbler most recently served as the chief of staff, U.S. Strategic Command, Offutt Air Force Base, Nebraska. He was the principal adviser to the USSTRATCOM commander and deputy commander, and directed the activities of the command staff by developing and implementing policies and procedures in support of the command’s missions. He chaired numerous boards, oversaw the command’s corporate process and served as the director of the commander’s staff.

LTG Karbler also served as the commanding general of the U.S. Army Test and Evaluation Command. Prior to that, he served as the director, Joint and Integration, Army G-8 at the Pentagon.

LTG Karbler earned his Bachelor of Science in 1987 from the United States Military Academy at West Point where he was commissioned as a second lieutenant in the Air Defense Artillery branch. He also holds a Master of Business Arts from Benedictine College in Atchison, Kansas, and a Master of Arts in strategic studies from the National War College. His military education includes the Air Defense Artillery Officer Basic and Advanced Courses, the Command and General Staff College and the National War College.