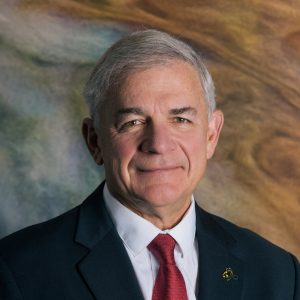 As CEO of Space Foundation, Tom Zelibor leads the world’s premier nonprofit advocate organization, founded in 1983, for the global space ecosystem. The Foundation’s mission is to be the preeminent advocate and gateway for lifelong education, trusted information and seamless collaboration for all people and organizations engaging in space exploration and space-inspired industries.

Tom has a broad and accomplished leadership and entrepreneurial background, having served as Chairman and CEO of Lightwave Logic, a publicly traded corporation that conducts R&D and production of advanced, high-speed organic electro-optic materials for use in devices in the telecommunications, data center, and high-speed computing markets.

He was also President and CEO of Flatirons Solutions, a high-tech IT professional services and systems engineering company, where he was responsible for the overall strategic guidance and direction of business operations, and a former Vice President for Science Applications International Corporation (SAIC).

Tom has an extensive space background including his 2021 appointment as a member of the Department of Homeland Security’s Space Systems Critical Infrastructure Working Group and the Defense Innovation Board’s Space Advisory Committee. In these roles and others, Tom has served with leaders from across the national security innovation base to provide diverse insight and analysis on some of the biggest challenges faced by infrastructure owners and operators; the military and intelligence communities; and commercial industry.

In addition to that leadership role, Tom has served as Director, eSpace Incubator at the Center for Space Entrepreneurship, where he managed a business incubator for aerospace startup companies. This incubator’s mission was to help create and catalyze entrepreneurial aerospace companies, help those companies commercialize their technologies, and develop a workforce to fuel their growth. During his esteemed military career, he served as Director of Global Operations, U.S. Strategic Command, where he led day-to-day and long-range operations and planning for strategic nuclear assets, space systems, Information Operations, information networks, missile defense and Intelligence, Surveillance, and Reconnaissance assets. As Deputy for C4 Integration and Policy/Department of the Navy Deputy CIO, he was responsible for integrating the Navy’s IT and command and control requirements into the “Sea Power 21” effort known as FORCEnet. At the same time, he served as the Navy’s Chief Information Officer, where he was responsible for detailing warfighting requirements and information architecture from the seabed to space. As Director of the Space, Information Warfare, Command and Control Division, he was responsible for requirements and budget authority for all IT assets, directly managing the Navy TENCAP Program and sponsorship for the Naval Space Cadre personnel that included space operations as well as space acquisition personnel. In his role as Commander, Naval Space Command, he was directly responsible for the operations and maintenance of all the Navy’s global telecommunications, information networks, and space systems, and he was the Navy Flag Officer responsible for support and sponsorship of all Naval Astronauts to NASA. His responsibilities also included duties as the Naval Component Commander to CINCSPACE (Colorado Springs) for Naval Space Operations.

Tom received his bachelor’s degree in Oceanography from the United States Naval Academy in 1976 and retired as a Navy Rear Admiral and Naval Aviator with over 35 years of significant leadership experience. The highlight of his military career was as Commander, Task Force 50, where he led three U.S. carrier battle groups, two NATO carriers, nearly 60 other U.S. and coalition ships, 300 aircraft, and thousands of personnel in the North Arabian Sea conducting combat operations in Afghanistan subsequent to the terrorist attacks of September 11, 2001. His other affiliations include: the National Association of Corporate Directors; Chair of Board of Directors, Lightwave Logic Inc.; Director, Dienen Inc.; Director, Baker Street Scientific Inc.; and Director, National Cyber Center (Member of the Space ISAC Subcommittee).